PDF Version
Company kicks off a year of anniversary celebrations

, /PRNewswire/ -- In 1959, with just five employees in a barn in , began manufacturing generators based upon his own unique designs. Sixty years later, the company he founded — — is a leading, diversified global supplier of backup and prime power products. Today, is officially kicking off a year of diamond anniversary celebrations. 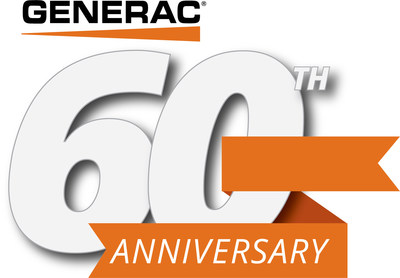 " has been and continues to be an inspiration to us at ," said , president and CEO, . "He has often remarked to me how the company has grown to exceed his wildest dreams. This year, we are proud to celebrate the foundation he built here in , which has led to the bright future we see as innovators and market leaders in power generation and outdoor power equipment around the world."

Those first generators enjoyed wide success via a partnership with a variety of retailers — a relationship that lasted several decades. continued to innovate its portable generators, and in 1989, launched the first ever automatic home standby generator. It was a move that created a market segment — of which remains the clear leader.

" created the market for home standby generators," Jagdfeld said, "and today seven out of every 10 home standby generators sold is a . It's an incredible legacy, and one we celebrate every day — not just during anniversary years. In fact, a few years ago, our one millionth home standby unit rolled off the assembly line. We're proud to bring peace of mind to customers across the country — and around the world — from our home in ."

product offerings have expanded over the years in response to customers' growing expectations and evolving industry opportunities. Today, customers can look to for commercial and industrial generators up to 2 MW; light towers and mobile generators serving rental as well as oil and gas markets; and chore products, such as trimmers, mowers and log splitters.

will celebrate its 60th Anniversary with year-long commemorative events.

(NYSE: GNRC) is celebrating its 60th anniversary as a leading global supplier of backup power and prime power products, systems and engine-powered tools. Back in 1959, our founder was committed to designing, engineering and manufacturing the first affordable backup generator. Sixty years later, the same dedication to innovation, durability and excellence has resulted in the company's ability to expand its industry-leading product portfolio into homes and small business, on job sites, and in industrial and mobile applications across the globe. offers single engine backup and prime power systems up to 2 MW and paralleled solutions up to 100 MW, and uses a variety of fuel sources to support power needs for our customers. We are proud to be named, in back-to-back years, the 2014 and 2015 of the Year. Visit Generac.com for more information.